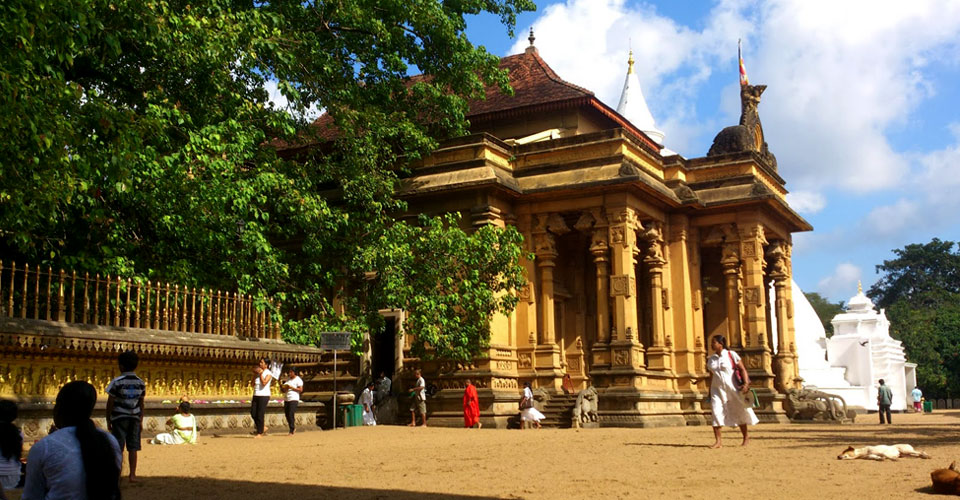 The spot on which this vihara stands derived its sanctity in the Buddhist era 2531, with the third visit of the Buddha to this country. He hallowed this ground by His visit accompanied by 500 Arahants. The fact that the Buddha visited the spot on a Wesak day on the invitation of King Maniakkhika is given in the historic epics of Sri Lanka

The Naga King, according to these chronicles had invited the Buddha to a repast at this spot which following the expounding of the Dhamma was consecrated and on which the King had built a vehera wherein the Buddha's hair and the utensils use at the repast together with the seat on which the Buddha sat were buried. However with the advent of time and the destruction of the vihara by the foreign invaders has resulted in the original dageba being lost today. Kaleniya Vihara however, received its hallowed status and became a place of Buddhist worship after venerable Mahinda brought the Dhamma to this country. According to the Mahawansa King Devanampiyatissa's brother Uttiya renovated the vihara for the first time. He is also said to have built the first Quaters of the Monks (Sanghawasa) there

Historical evidence shows that the Kelaniya Vihara was at its highest glory during the Kotte Era. By the time the Portuguese conquered the country considerable land had been donated by the kings to the Kelaniya Vihara, and when in 1510 the Portuguese entered and destroyed the secret temple. They had confiscated this land preventing Buddhists from worshiping at the temple.